Put two graphic designers in such a visual setting — steep green forests, narrow valley below, misty ridges, full sunny days and wide starry nights — and you get a poster house for indoor-outdoor connections.

Bob Mosqueda and Nancy Kinnear so love the outdoors, they bought 25 acres of Lane County hinterland about 10 years ago as their weekend escape from traffic-clogged Seattle. The couple first built a small cabin to get their country feet wet, and now have expanded that unit into a 1,700-square-foot, work-from-home abode rich in glass, wood, natural colors and front-to-back open living.

“Initially I wanted a lodge feel, and I think in an abstract kind of way we did get that,” Nancy says.

For sponging up their classic Western Oregon foothills setting, Nancy and Bob turned to a pair of Eugene firms: Nir Pearlson Architect Inc. for design expertise, and Six Degrees Construction for timber-frame elements and other craftsmanship.

“What we were trying to do,” Bob sums up, “is bring the outdoors in. We love the outdoors.”

But for such “connectivity to site,” as architect Pearlson calls it, he and associate Roger Ota had to play the angles with roofs and interior spaces.

“It was kind of big deal how we could stitch it all together,” Pearlson says.

They could have played it safe and built straight as an arrow off the existing cabin. But by angling new construction a tad, Bob and Nancy widened the view and increased sun exposure. Following the site’s existing contours also reduced the foundation’s cost, though some piers were still required to bear the house on stable native soil.

Most striking, the home now has three main shed roofs, each at different slopes. The original cabin’s roof “reaches” for the sun at a modest upward slope, but right next to it the new main roof slopes slightly down for two strategic reasons: exposing a bank of solar electric panels to southern sun, and overhanging main living spaces just enough for shading when the summer sun is at its highest angle.

A third shed roof gets dramatic, this one for the home’s new upstairs bedroom and bathroom. It soars toward the opposite ridge and celestial bodies beyond.

“It’s the ecliptic,” Nancy explains. “We get the path of the planets and the sun and the moon, everything runs across. So we get the moon as it’s setting over there, and rising over here.”

Beyond solar angles, the roof sections have wide overhangs for sheltering outdoor spaces, namely an outdoor patio with barbecue and sink.

“I needed to have a covered space for my barbecues, and so 365 I can be out there barbecuing,” Bob says. “That’s a big part of our culinary experience here. I needed to have that covered, a place I could be protected from the weather.”

Inside, hefty timbers of Douglas fir support open living from bow to stern, or from original cabin — now a suite for Bob’s elderly father — to new kitchen. “We wanted that long view, because that makes the place feel immense,” Bob says in reference to the relatively small and narrow floor plan.

Look close, and you see how timber framing by Six Degrees creates subtle dimensions of space, Pearlson points out. Some walls, for example, extend right up to support pillars; others are recessed slightly back from the columns, both for a timber aesthetic and slightly expanded space.

Above the dining room area, Bob and Nancy chose a ceiling of exposed wood framing. Fir beams running beneath tongue-and-groove hem-fir ceiling decking — all in support of the second-floor bed/bath above — play off the home’s forested environment.

But any additional exposed ceiling framing “would be too much statement for us,” Bob says. “We didn’t want that much wood.”

Nancy is the expert with interior wall paints: “The colors are all brought in from what we see outside.”

Plaster walls and ceilings of dark, earthy orange are “the color of the oak leaves when they’re drying and in the sunshine,” she says in a nod to oaks beside the house. Lighter orange interior paint evokes the property’s clay soils, while neutral gray expanses stir moods of fog, rocks and bark on trees.

The couple have their indulgences. Electric coils heat the kitchen island’s wide Caesarstone countertop of crushed granite to as high as 80 degrees. “It’s perfect for raising bread, for keeping your coffee warm in the morning, or your plates from not getting too cold,” Nancy says.

Outside, next to a big retaining wall of basalt boulders, is a propane-heated swimming pool within a concrete patio. The couple also have a two-story workshop with offices and guest bed upstairs.

The home’s concrete-based siding will hold paint for years, and while they have a garden, Bob and Nancy plan to enjoy their home without a lot of weeding.

“It feels more like home than any place I have ever lived, including where I grew up as a child, which to me is really pretty important,” Bob says. “I have great memories of that childhood home, but this is really where I belong.” 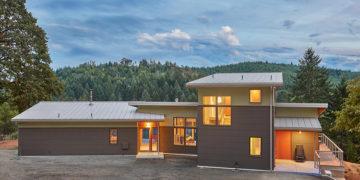