A cabin turns into a home

A ONE-ROOM CABIN PERCHED AT THE base of a steep, wooded hill was a suitable weekend getaway, but it needed more space, easy access to the outdoors, and a way to take in the expansive views to become a suitable permanent home. One couple got that with the help of Eugene architect Nir Pearlson.

In 2004, Washington State natives Bob and Nancy bought 25 acres in Cheshire, and over three years cleared the land and built a 480-square-foot cabin to house them on weekends and vacations. In 2010, they erected a large shop with offices and storage, and moved from Seattle in 2013. After researching several architects, the couple selected Pearlson because they appreciated his sustainable philosophy, clean lines, and connection to nature.

The original cabin is still there but is unrecognizable, as two wings comprising the guest rooms and the main living area were attached to either side of it, following the hill’s contours and linking the home to the outdoors in multiple ways.

“The bedroom is up high, like being [in] a bird’s nest with higher views,” says Pearlson. “The main floor is strongly connected to all sides, so it’s easy to move in and out of it to get outdoors, and there’s a visual connection with the outdoors everywhere.”

Bob’s father now lives in the guest quarters, where a glass panel above a sliding door encloses his space. “The glass opens it up for him even if the doors are closed,” Nancy says, “and we can look in and see if his lights are on.”

The home’s length, incorporating the 1,201-square-foot addition, and the abundance of windows make it seem bigger than it is. “The specific thing we wanted was lots of windows and for it to be really accessible to the outside, physically as well as mentally,” Nancy says.

The floors in the central room and kitchen are rectangular porcelain Emser tile, with maple in the space that transitions from the mudroom door to an outside deck. “We knew we would be mixing woods so we kept it light,” Bob says. The couple deftly combined pine window frames, cherry cabinetry, sycamore furniture, and fir beams in the living area and dining room, creating a restful atmosphere throughout the two rooms.

The 11-foot table is useful not only as a dining spot, but also as a general gathering spot. “We did a lot of jigsaw puzzles there this winter!” recalls Nancy. In Pearlson’s words, the dining room became “an expression of timber” with its stout fir beams, which also support the second-floor master suite. “The beams are not kiln dried,” says Bob, “so they’re starting to ‘check’ now, which is giving us the character we wanted.”

The couple originally wanted the beams to continue through the outer wall and be part of the overhang on the patio, but Pearlson convinced them that it would be more energy efficient not to do that. The beams visually continue to the outside, but they do not go through the wall. A solar array on the expansive south-facing patio helps keep their energy usage to a minimum in the summertime.

Nancy stained the cherry wood cabinetry in the kitchen with a gray Sherwin-Williams stain to create a more neutral palette. The color scheme is calm except for a pop of chartreuse paint in the laundry room, which is visible from just the right spot in the kitchen. Nancy, an avid bread baker, chose a Caesarstone island for the kitchen that can be heated. “You can’t count on regular countertops to be warm enough to rise bread,” she says, “and it’s great for setting a coffee cup on so it doesn’t get cold right away.”

The downstairs powder room off the kitchen has a sycamore cabinet with a curved front that the couple liked so much their cabinetmaker replicated it on the buffet. The light-filled staircase leads to the private bedroom upstairs. “The railing on the stairs mimics the railing used outdoors on the porch,” Bob notes. “The porch railing comes in kit form, but this one we had to fabricate with lighter wire and lighter posts so it wouldn’t look as heavy as it does out there.”

Upstairs, a nearly 8-foot-wide-by-9-foot tall cherry cabinet hides their clothes. The bathroom, with a heated floor, is a small rectangle, but looks more interesting thanks to a glass panel partitioning off the shower and two showerheads that can be either rain showers or handheld sprayers.

Fir beams in the master suite and endless views give the feeling of being in a bird’s nest. The green beams occasionally drip sap, but the couple doesn’t mind that inconvenience, knowing that the beams are aging into the rustic, handsome look they want. “We’re starting to lose sight of the cabin!” laughs Bob. “We love what this has turned into.” 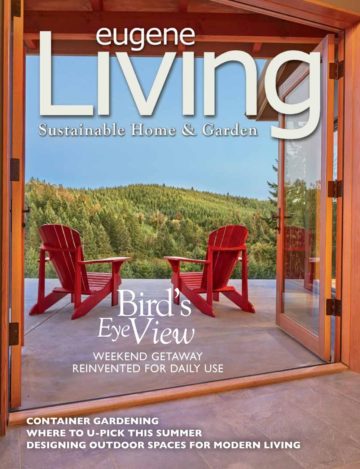