Playa is a retreat center in Eastern Oregon that offers residency to artists, writers, and scientists. The small campus is set on the shore of Summer Lake between the Fremont-Winema Forest and the Great Basin. Following steady growth and popularity, Playa’s Board of Directors committed in 2014 to building a new small home for the incoming executive director. Playa’s co-founder, Bill Roach, a master designer with four decades of experience building custom homes, asked us to join the design team.

We had collaborated before, in 2008, when Roger Ota, my lead designer, and I partnered with Bill to upgrade Playa’s site and infrastructure and reinvent its common building. Since then, the three of us have continued to explore new architectural frontiers. In addition to ongoing conversations via phone and email, we’ve met periodically over the years to huddle over sketch pads and pints of Oregon craft beer to share design concepts, discuss construction technology, and debate the merits of prefabrication.

The need for a new small home at Playa provided us with a perfect opportunity to test our theories and creativity. Bill launched the endeavor with elegantly hand-drawn plans, sections, and elevations of a two-­bedroom cottage. Over the next two years, Bill, Roger, and I methodically honed in on a design scheme that put a high priority on the landscape, modular construction, and sustainability. Construction began in 2016.

Playa is surrounded by powerful geography. The steep basalt slopes of Winter Rim rising to the west and south instill a sense of safety and stability at the site. To the east, flat terrain stretches far beyond the alkaline lake bed to a distant horizon. Overhead, ever-changing drama unfolds in the big sky: rolling cloud formations, fluctuating color gradients, and the movements of the sun, moon, and stars. This unique setting became a key determinant of the building’s form, orientation, and organization. The shed roof resembles the gentle rise of the hills that wrap around the lake’s southern end, and offers a protective element against the prevailing winter winds that rush down the slopes from the southwest. The west-facing main entry under the low end of the roof creates a natural sequence of movement through gradually rising interior spaces. Tall walls shelter a patio on the northeast side of the house. Within this form, the rooms are arrayed to take full advantage of the varied vistas, ushering in the changing light as the sun arcs across the sky.

Early on, we decided to gear the design toward prefabrication, which we believe is the future of affordable and sustainable housing. Each part of the home is defined by appropriately proportioned shapes. Overlaid on a four-foot grid, the spaces—living room, kitchen/dining room, bedrooms, bathroom/laundry, and entry and circulation hall—can be repeated, rotated, mirrored, and nestled together into other patterns. In other words, this plan can be easily customized to suit the needs of a variety of homeowners using the same basic shapes and spaces, and if it were offered as a prefab home, the same modules.

The plan includes a utility core where the major mechanical, plumbing and electrical systems are consolidated into a centrally-located module and a wet wall that houses all of the plumbing for the kitchen, bathroom, and laundry area.

Our strategy turned out to be a bit ahead of our time. We were able to find only one regional manufacturer interested in building the modules we needed for the home, but the quote was cost prohibitive. Still, in order to reduce the amount of material transported to the remote location, we had the walls panelized in Eugene, Oregon.

The temperatures in Summer Lake frequently swing 30° to 40° within a day, regularly dipping below freezing in the winter and hovering around 100°F in the summer. We carefully detailed the home’s envelope with rigid mineral wool outside of the wall sheathing and spray foam under the roof decking, in addition to full-cavity batt insulation. The house is heated with a high-efficiency mini split system and a wood-burning stove and ventilated with a heat-recovery ventilator. The metal siding and roof are maintenance-free, and the big windows, glazed doors, and a skylight bring in abundant daylight.
The most sustainable feature of the house is its size, which is “among the most important determinants of environmental impact,” according to a 2010 report from the Oregon Department of Environmental Quality. Despite its 960-sq.-ft. footprint, the house’s tall ceilings, interlinked spaces, and long vistas make this compact home feel expansive. 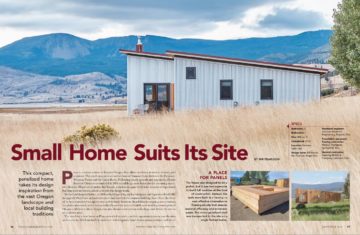