On a clear day, Barbara and Robert Jacobs can see to the Three Sisters Mountains from their ranch home’s 5-acre hilltop property west of Eugene. But a lot of good the view was doing them in the heart of their home, the kitchen.

“The house was built in the middle ’60s; it was very compartmentalized,” says Barbara, a retired principal from the Fern Ridge School District.

A solid wall of cabinets separated kitchen from living room, where picture windows indeed captured panoramic views, first to the couple’s gardens and pastures for their horses, then down to Eugene-Springfield, and from there up to the Cascades.

So for 15 years — yes, 15 years — she would sit in the old, confined kitchen and picture a makeover.

Her first obstacle was a bearing wall, affixed with “funky” plywood cabinets, that just so happened to help shore up the 3,200-square-foot home’s roof. So the Jacobses made a call to Eugene architect Nir Pearlson’s office.

“A lot of the remodels that we do have the same goal, to open previously compartmentalized spaces,” says Roger Ota, a designer on Pearlson’s staff. “A lot of times the challenge, or one of them, is altering the structure to make it happen.”

Faced with replacing the old 20-foot bearing wall, Ota chose to go with engineered beams: a lower one, exposed to view in a smooth and decorative finish, and a rougher one above that in the attic for yet more structural support.

General contractor Nick Russo of Renaissance Construction went to work, and suddenly Barbara had her dream: standing in the kitchen, now open to the living room, and gazing out the living room’s expanded picture windows to the outside world.

“As soon as they bashed out that wall, I went, ‘You don’t have to go any further than that.’ I felt so liberated,” Barbara says.

She was teasing about stopping there, of course. Fifteen years is a long time for ideas.

“Maybe more so than some clients, they had a really clear vision of what they wanted,” understates Ota. “Nobody really knows the space better than someone who’s been living there.”

White kitchens may be the rage, but Barbara “wanted something absolutely different.” Thus, she chose birch cabinets with baked espresso stain and out-of-this-world custom countertops.

“Some people said the cabinets were going to be too dark in the espresso stain,” husband Robert says. “But Barbara wanted them, and she turned out to be right — it’s not too dark.”

Especially with such celestial contrast below.

Below the backsplashes of swirled celestial bodies are porcelain tile countertops in cobalt blue.

An opposite countertop, made of food-friendly maple in butcher-block style, runs a full 16 feet along the new wall opening.

Since remodeled a couple of years ago, the Jacobses’ kitchen has invited more than great views.

For years, Barbara had been cut off from both the living room and dining room while cooking for guests.

“I couldn’t be a part of the entertainment or conversations because I would be in the kitchen,” she says. “This way it’s lovely; people can be eating at the (dining room) table, and I can be prep cooking here and still be a part of the whole scene.”

Hand-forged iron light fixtures from Hubbardton Forge in Vermont mix with other artworks, including several horse paintings by Robert’s godfather, the late Milt Wolff, an American veteran of the Spanish Civil War and last commander of the Abraham Lincoln Brigade.

Furnishings include a reconditioned Douglas-fir parson’s table in the kitchen, where the Jacobses dine on produce from their 1-acre vegetable garden out back. “We don’t grow everything, but we grow a good percentage of it,” Barbara says. “We’ll sit down to dinner and I’ll go, ‘Do you realize how much of this we’ve raised here?’”

Now with summer’s approach, each new day brings more joy in the kitchen. 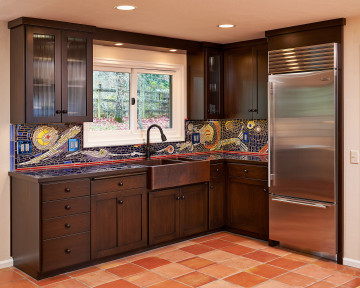