The Mt. Hood Cultural Center and Museum is moving forward with an expansion that will nearly double its existing space.

In the nearly 20 years since it found a home in a building on the main drag of Government Camp, the Mt. Hood Cultural Center and Museum has attracted a steady stream of attention — and donations.

Almost every inch of the 9,000-square-foot, three-story building that houses the museum is filled with enough artifacts to allow visitors to spend more than a few hours learning about the history of the area.

The carefully curated exhibits — including a 146-pound meteorite and a stuffed black bear named Lucy — are just a hint of a trove of historical treasures the museum possesses. Hundreds more pairs of skis, boxes of ski club patches, paintings and drawings by local artists and other donated items are currently in storage because there’s simply not enough room to display them.

“The museum is bursting at the seams,” Diane Lokting, development director for the museum, told the Business Tribune. “The archives are full. The galleries are difficult to rotate things in and out of. We don’t have enough room for traveling exhibits.”

With the museum’s popularity showing no signs of slowing — it currently has 25,000 visitors a year — its board of directors has come to realize it’s time to take steps to find more room. Over the next 10 years, the museum will undergo a three-phase expansion that will nearly double its space to 17,000 square feet and create new areas to benefit everything from research efforts to community gatherings.

Before that happens, though, there’s a fundraising campaign that needs to be officially rolled out. Admission to the museum is free, and the facility operates with money from grants, lectures and other fund-raising events, and gift shop sales. With a goal of at least $8 million for the total expansion project, the museum “needs to get all of its duck in a row,” according to Lokting.

Making do
The museum traces its roots back to the 1990s, when Government Camp began working with Clackamas County on an urban renewal plan. Some local women began talking about starting a museum to chronicle the history of life “on the mountain.” In the early 2000s, they convinced Lloyd Musser, a local historian who had recently retired, to help with the effort.

When one of the women passed away, her daughter offered the woman’s collection of local historical items to get the museum started.

“We took a semi-truck-load of stuff out of the house,” Musser said. “It was a houseful of Mount Hood history.”

The boxes of photos and ski patches, old skis and various other items were almost an entire museum. The only thing missing was the building to put the items in.

Musser and others involved in the museum effort decided to approach a woman who ran a local bedand-breakfast able to accommodate as many as 25 guests. The woman wanted to retire, but she didn’t want the building to go to a developer who might tear it down to make room for condominiums.

The only major change made to the building since then was the addition of an elevator a couple of years ago. The experience with the elevator installation taught the museum’s board of directors a few lessons that came in handy as they moved toward selecting an architectural firm to design the expansion design.

The elevator project was paid for with HUD money from Clackamas County. As part of that deal, the county stipulated that the project contract would be awarded by a low-bid process. In addition, the museum was required to cover any cost overruns.

“The first day started with a cost change, and it went up from there,” Musser said.

The museum, which is mainly volunteer-driven, may turn to HUD money again to help pay for the expansion. This time, though, board members and the county have already agreed to some different ground rules when the time comes to hire a general contractor to do the actual construction work.

“This time around, we’ll be able to look at the contract and have more say in the bidding process,” Musser said.

The right fit
A bad experience with the contractor who installed the elevator also led the museum’s board to move with deliberate precision when it came to choosing an architectural firm for the expansion project.

With the guidance of architect and board member Alene Davis, who recently took over president duties from Musser, a request for proposals was extended to four firms with experience in event and museum space. Of two firms that responded, the board settled on Eugene-based Nir Pearlson Architect Inc.

A walk through of the museum building with Pearlson assured the board members that he and his firm were the right choice, especially when the architect weighed in on a plan to expand the museum’s available space for events.
The museum is one of the few places with enough room for any type of community meeting or gathering. But that space is limited to 100 people at the most, and even a crowd of that size has to be spread out between the main gathering room and an exhibit room.

Musser and Bing Sheldon, a co-founder of Portland-based SERA Architects who was an active member of the museum board during his lifetime, had always envisioned a separate event hall building with enough room to accommodate events like weddings and lectures on an empty patch of land behind the museum building.

But Pearlson suggested the event hall space be made part of the existing building. By putting it on an upper level and adding floor-to-ceiling windows, the 200-person-capacity room will have a head-on view of Mount Hood.

Snow problem
The architect also immediately realized a problem with the dormers and other features on the roof of the existing building. The person who designed the building wasn’t familiar with the type of snow conditions that Government Camp experiences, according to Pearlson. Bay windows with gambled roofs create nooks and crannies that can trap snow as it melts and slides down the roof.

“You can walk around the building and see where the [metal roof] was bent from the great amount of snow and ice,” Pearlson told the Business Tribune. “There’s definitely quite a bit of problems with that.”

To remedy that problem, roof lines will be simplified. Durable materials such as stone wainscoting, stone column bases and wood siding as well as new metal roofing will ensure the renovated exterior of the museum blends with other buildings along Government Camp Loop.

Expanding the front of the building to the sidewalk will solve another existing problem. In addition to providing more interior space, including room for a new research library, it will allow the addition of a covered entry space so that people can “walk right off the street basically to the [front door]” without having to navigate snowy or icy paths, Pearlson said.

Money matters
The museum already has a head start on building a pot of money for the expansion work. During an annual fundraiser in November, an initial $10,000 in soft-launch money was collected. There’s also a place on the museum’s website where people can make donations, and a more formal fundraising campaign is under development.

In creating the campaign, Lokting is tapping previous experience trying to raise money to build a community center building in another city. That project was about $2.5 million. Knowing that the museum project will be more than triple that amount, Lokting and the board decided to break it into phases.

“This is a big project, “Lokting said. “What we realized with this project is, if we create it in phases and then fundraise and write grants for one phase at a time, our chance of success will be a lot better”. 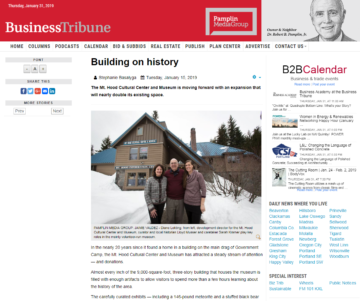