The Owners of “Ocean View” spent more than a decade planning for their new home, saving money, preparing the site, and crystallizing their vision before beginning to build. What was intended to be a weekend getaway in a small northern coastal town turned into a permanent residence once their working life changed due to the global pandemic. Thanks to thoughtful planning by Roger Ota, lead designer at Aligned Architecture, the house has both the ease of a getaway and the daily comforts of the home they always wanted.

“We decided quite a few years ago, when we drove through this town and fell in love with it, that this is where we wanted to live when we retired and could have the weekend place,” the homeowners say. The husband and wife from Eugene bought the quarter acre lot 15 years ago. It remained vacant as they moved through their careers and envisioned their dream home. Maintaining the ocean view was fundamental, as was an open floor plan for the living area oriented toward that view. Also non-negotiable were an excellent kitchen and a soapstone Tulikivi fireplace as a focal point. They
now have all those things.

They first met Nir Pearlson, principal at and founder of Aligned Architecture, at a home show. “We fell in love with the firm’s style of architecture,” the homeowners say. “Their style matched really well with our own. We had confidence that Nir and Roger would take our own plan sketches and turn them into a design that would be better and more efficient, while still reflecting the things we wanted.”

Ota gave them plenty of space for working. He organized the living
room around the Tulikivi fireplace, in a way that the homeowners couldn’t
fully envision on their own. A dormer window with a seat provides the feeling of sitting in the branches of the large spruce across the street from the house. The homeowners enjoy sitting in that window, watching the birds fly by, and the fishing boats ply the ocean.

“When you’re in that space, you feel almost like you’re out beyond the
house, like you’re in the trees,” the homeowner says. “Other people that come to the house have also made that comment.”

Aligned Architecture has a lot of experience designing great rooms,
which include a living space, a dining space, and a kitchen fairly close to
one another. “In new construction, we usually plan the house around
that great room,” Ota says. “And in this case, we had the building’s axis
intersect with the long axis of the beach vista, so an L-shaped great room
became very effective.”

With two bedrooms and two bathrooms on two floors, the home
is comfortable and spacious without trying to compete with the grandeur of the ocean view. They also installed an elevator, which will allow them
to stay in the house as they age. An oversized garage accommodates storage and clutter. A downstairs bedroom with an attached bath is currently in use as an office, but could easily become guest quarters. Normally, Ota says, they wouldn’t design the primary living space on a second floor, but this arrangement accommodates the steep slope of the site and opens the great room to the panoramic view.

“Pacific City Homes built the home and did a great job despite the
challenging lot,” the homeowners say. “We were really pleased with their work and the get-it-done attitude they brought to the project.”

The couple enjoys cooking, and while the kitchen is modest in size,
it is very efficient and convenient, with two sinks (one under a large window) and a breakfast bar. The dramatic kitchen backsplash proved to be the husband’s favorite feature. “We saw someone who had done a similar backsplash with granite, but we put the tiles in vertically instead of horizontally, and that’s my favorite,” he says.

Cabinets throughout the home are made of alder, as are the windows and
baseboards, giving a rustic, informal appearance. “We both like wood, and we went with a lighter-colored wood because in the winter, the coast can get pretty dark,” the homeowners say.

A sauna, which the homeowners say was one of the big indulgences, provides a quick way to warm up after chilly beach walks. Another design victory is utilizing a spine of service areas along the back of the house. The space is used as the laundry room, with the washer and dryer recessed into the wall, and also includes counters and cabinets for hobbies and other crafts.

“It was a stroke of genius to put that room there,” the homeowners say. “Everything works, and that’s because Roger and Nir understood our thought process and how to deliver what we were asking for. They interpreted what we told them and turned it into a wonderful house.” 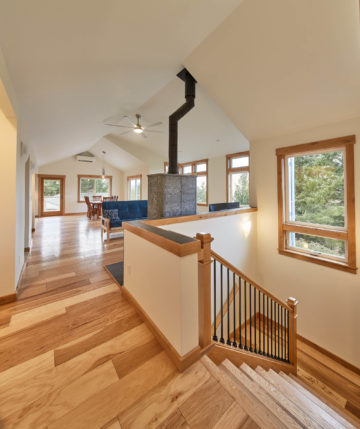