The large home, seemingly inseparable from the American Dream, is in fact a recent development. A product of 20th century socio-economic trends, big houses were fueled by a booming economy, permissive land-use regulations, streamlined manufacturing, and suburban sprawl. Between 1950 and 2004, the average American home grew from 983 SF to 2,349 SF (National Association of Home Builders).

Two centuries of rapid industrial development, population growth, and increasing resource extraction has resulted in accelerated environmental degradation. Throughout the world, factors such as over-crowded communities and unequal distribution of resources continue to deepen the rich/poor divide, fraying the social fabric. The world as we know it is dramatically changing.

As individuals and communities adapt to our changing world, the notion of going back to basics is shaping new living arrangements. The romantic small cabin has morphed into a hip 21st Century villa through the work of homesteaders, builders, designers, developers and writers like Sarah Susanka, author of the Not So Big House book series.

As sustainability has become paramount to citizens, communities, and organizations throughout the world, the small house has come to represent eco-conscious living: A small footprint preserves land and minimizes resource extraction, and the compact form reduces energy use. Often supplemented with high-performing envelope and high-efficiency equipment, the modern small house is cheap to heat and cool. According to a 2010 report, the Oregon Department of Environmental Quality found that “reducing home size by 50 percent results in a projected 36 percent reduction in lifecycle greenhouse gas emissions.”

The small-house movement has progressed beyond the alternative realm, gaining strength within main-stream America, whose average household size declined from 3.1 to 2.6 people between 1970 and 2012 (US Census Bureau). Small homes appeal to diverse demographics: retirees seeking to downsize, families prioritizing affordability and sustainability, and younger folks preferring agility and mobility over cargo and stability.

How Can it Work?

After decades of believing that a bigger house is a better house, it seems daunting to fit our active lifestyle into a modest footprint. Planning homes that are both compact and expansive requires creativity, discipline, and careful integration of small-house design principles. These may include overlapping activity areas, linking spaces into a continuous flow, defining sub-areas within larger spaces, utilizing space-saving elements, allowing for long views, carving cozy alcoves, maintaining visual connections with the outdoors, and providing ample daylighting.

The Demand Institute’s May 2012 report The Shifting Nature of US Housing Demand, predicts that “The size of an average new home is expected to continue to fall…” As the small house movement leads us toward positive change and appropriate living patterns, may we all consider going small! 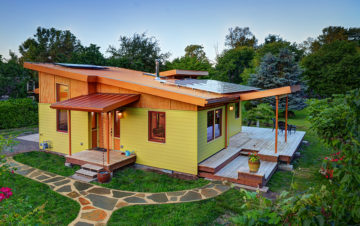 The Next Big Thing Is Small