Finding Nir Pearlson’s architect studio is a bit tricky. Located off of Agate Alley, the quaint and unassuming space might go unnoticed to a passing jogger, but if you stop and actually look at it, the small studio is a perfect representation of the kind of business Pearlson is focused on; architectural sustainability.

Attempting to avoid the rain on an early February day, I take shelter under the covered entrance of what appears to be a typical awning. But a closer look reveals that it is a recycled car windshield. Inside, the beautiful space is blanketed by site-fabricated steel scissors trusses supporting an angular vaulted ceiling. Using sustainable lumber, the structure features reclaimed wood doors, bamboo flooring and a night-flush ventilation system designed to “flush” heat away from the building at night.What was once Pearlson’s residential garage designed to house cars has been transformed into a creative studio environment that the architect has worked from for nearly a decade. Working a few feet away from home was a convenient and easy decision to make for Pearlson as his work and home life before the conversion was even closer than it is now.

“I worked in a really tiny room that was directly outside of my bedroom so the only way to get into it was through my bedroom which meant that if I ever had a client meeting, they typically happened in my dining room because it was better than taking them through the bedroom. But sometimes I did have meetings in there,” said Pearlson.

Despite the close proximity between his work and his wife and kids, Pearlson is used to working creatively in a family environment. He grew up in a small communal village in Israel where he was constantly exposed to the way things are made not only within the small communal village, but also in his own household where his mother was a teacher.

“There’s always been some form of an art studio in our house and my mom was doing it with jewelry and macrame. She had her own shop since she was a teacher and she taught elementary and middle-school kids so I always had a key and access as a boy if I ever wanted to build something or fix something. I took the key and went to her workshops and had access to all of it,” said Pearlson.

As a young man, Pearlson travelled through different cities and supported himself as a builder and carpenter. He decided he wanted to study architecture after being drawn to both the composition of a building which challenged him artistically, and the simple workings of a building as a carpenter.Eventually he landed in Eugene where he earned his Architectural Degree from the University of Oregon in 1995. Soon after graduating, Pearlson was able to find work almost immediately and he gained valuable experience working on a number of different projects.

“I worked for a company which is now called PIVOT and for five years I worked mainly on Government projects in Salem and Tillamook for the Oregon Department of Forestry. That was a very good education on how to work on big projects and how to work within an office environment, how to manage teams and building campuses and just really complex commercial projects on a very big scale,” said Pearlson.

Eventually he decided he was ready to move on and start his own business. In 2003, Nir Pearlson Architect, Inc. was formed. Since starting the business, Pearlson has consistently had a team of three to four people working in the office. The studio provides a full range of architectural services for commercial and residential projects including site selection & assessment, architectural design, interior design and construction administration.

With all of these services, the architect emphasizes the importance of green-building and sustainability when taking on a new project.

“I’m most excited about the design when doing a project, but you always try to come back to sustainable practices. I think it has definitely influenced our designs a lot. Are designs are rooted in sustainability with regards to efficiency of space, efficiency of material, emphasizing the light and air and making sure we insulate properly.”

Pearlson believes it’s important for architects to constantly research smarter and more efficient ways to design buildings. Pearlson will always push for a more responsible way to design something, but ultimately it depends on what the client wants.

“During initial conversations with clients we ask them, are you interested in capturing the sun’s energy or using solar thermal or are you interested in capturing rain water and reusing it for irrigation or recycling gray water? A lot of times it’s pretty clear from the beginning what they want and many times people actually come to us and say, we want to have this, we want to have that and then we say hallelujah, we don’t even have to ask them.”But there was a time when Pearlson wasn’t getting as many clients as he wanted. Like most small businesses, Pearlson was affected by the recession and a couple of times was forced to contract and work on his own. But because he worked out of a small space that didn’t require as much overhead as a larger business might, Pearlson was able to survive and develop new relationships.

“I like marketing and staying connected with the community with regards to sending emails and newsletters and greeting cards in order to keep my connections and keep people aware of what I’m doing and I was also lucky to have some projects that were fairly high-profile and I think that helped as well. The caliber or level of projects and project recognition helped me through those tough times as well.”

Those high-profile projects he’s referring to include La Perla Pizzeria, Imagine Graphics and the new headquarters and remodel of Hummingbird Wholesale which will open its doors this week. Besides the commercial projects, the studio has also completed residential homes and cottages.

Over the last few years, Pearlson has seen a shift to more remodels and additions than original design projects for the company. More and more people are investing in what they already have and hoping to turn their homes into potential assets to sell in the future. Pearlson believes it is a sign of the times that the housing crisis is still prevalent.

Despite a shortage of new homes, Pearlson is keeping busy with redesigns and feels they prove to be more difficult and rewarding than original structures.

“Generally, redesigning is more challenging because there is always going to be a lot of constraints. In a way that makes it more interesting because you have to focus on the site with regards to the access and the view and vegetation and slope. It’s never like building from thin air. In a way, redesign is more rewarding because there’s more of a transformative process because you have to first undue what’s wrong with it and create what’s right so it’s really fun and challenging.“

As far as future projects, Pearlson has a full plate. The studio recently helped the Lane County Historical Society with a preliminary feasibility study of the Eugene Post Office as a potential future home for the Lane County Historical Museum. The studio is also completing an 800 square-foot residential house on River Road which will be equipped with energy-efficient systems and Pearlson also has a couple of residential remodel addition projects.

This seems like a lot of work for a small architecture studio, but Pearlson maintains the importance of past experiences in project management as the key to balancing not only all of the projects, but also all of the little things that go into running a successful business.

“It’s all part of the creative process actually and I don’t find it loathsome at all but it definitely takes a lot of time. I’m very involved in the different aspects like the building and timekeeping and writing proposals and when I started this business I was unaware of how much depth of knowledge I needed to have in so many aspects that seemingly have nothing to do with architecture,” said Pearlson.But he is proud of the different projects he’s worked on over the years and all the people he’s gotten to know. He’s excited about improving his skills and collaborating with new people who are talented and have a passion for architectural design. Eventually he would like to move out of his small studio and take on bigger and more challenging projects and he feels it has to happen and will happen. But for now he’s content with where he’s at.

“I’m learning how it’s completely impossible to stop learning. We’ve definitely ventured into a lot of areas that I haven’t before like restaurants and a brewery and a grocery store. I hope the economy allows me to do more and I would like to have a team of people where we’re big enough to create great things but small enough to manage.” 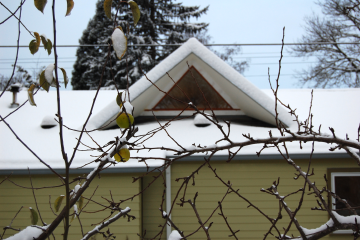